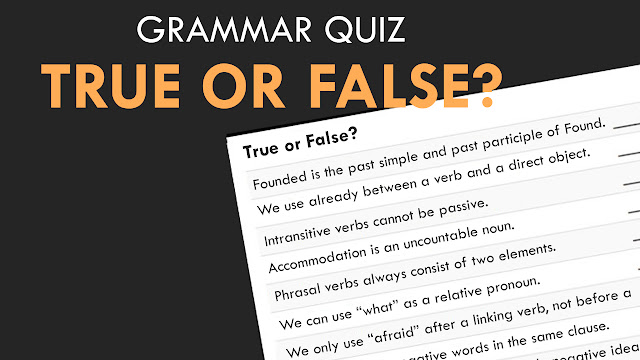 2. We use "already" between a verb and a direct object.

FALSE
We use "already" to say something has happened before now or before a particular time in the past.
"Already" usually comes before the main verb or between the auxiliary and the main verb.
We can use "already" at the end of a sentence for emphasis.
We don’t use "already" between a verb and a direct object.

5. We use the past continuous, not the past simple, to talk about past states or habits.

FALSE
We can use the past simple as an alternative to used to or would to talk about the things we did repeatedly in the past.

6. Accommodation is an uncountable noun in British English.

FALSE
Phrasal verbs are multi-word verbs. They consist of a verb and one or two particles or prepositions.

We don’t use "what" as a relative pronoun.

9. We only use “afraid” after a linking verb, not before a noun.

10. We can use two negative words in the same clause.

FALSE
In standard English, we don’t use two negative words in the same sentence to express a single negative idea.
The use of double negatives in English is not considered correct and you should avoid them.

11. The word Police must always be used with a plural verb.

TRUE
The word Police is a plural noun and is followed by a plural verb.
The police are the official organization that is responsible to make people obey the law and to prevent and solve a crime; the people who work for this organization.
When talking about someone who works for the police, we say a police officer, a policeman, or a policewoman.

12. Some adjectives do not have comparative and superlative forms.

TRUE
Some adjectives do not have comparative and superlative forms. They are called non-gradable adjectives, for example, nuclear, western, electronic. These adjectives cannot be modified by adverbs.

Popular posts from this blog

Phrasal Verbs with GET - Quiz