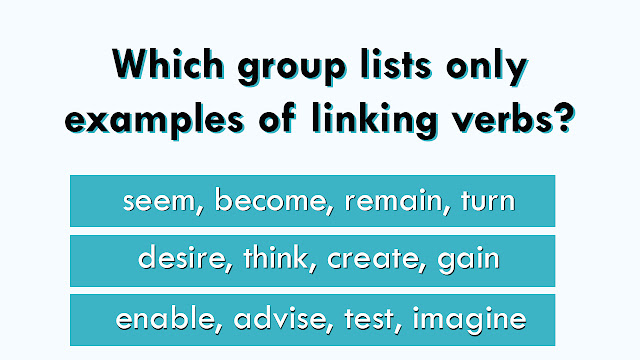 2. In which sentence is the word taste used as an action verb?
A) The hot chocolate tasted delicious.
B) He tasted the delicious hot chocolate.
C) Both A and B.

3. Identify whether the verb acts as Linking or Action.
I could feel the warm sun on my face.
Linking
Action

4. In which sentence is the word remain used as a linking verb?
B) The plane remained on the ground.
A) He remains undecided about what to do next.
C) There were only five minutes remaining.

5. Choose the sentence with a linking verb.
B) We decided to sound the alarm.
C) I've never tasted anything like it.
A) She made him look a complete fool!

6. Choose the sentence with an action verb.
A) He helped his father lift the box.
B) You look beautiful today!
C) Both A and B

7. Identify whether the verb acts as Linking or Action.
We're all getting older.
A) action
B) linking

8. Choose the sentence with a linking verb.
B) He satisfies all the requirements for the job.
A) He seemed satisfied with his explanation.
C) Both A and B

9. In which sentence is the word look used as an action verb?
A) Look closely and tell me what you see.
B) Ann looked thoughtful for a moment.
C) The bananas in the bin looked disgusting.

10. Choose the sentence with a linking verb.
A) Germany’s strategy has proved successful.
B) Designing the building proves difficult for them.
C) Both A and B

Popular posts from this blog

Phrasal Verbs with GET - Quiz